The history begins on May 23, 1922, when the city administration gave the architect and businessman F. Kangro the permit to open 5 bus lines.

1922-1939: city lines and intercity lines begin from Vene turg (Vene market) which was also known as Täiturg (flea market) and in 1939-1940 Viru square. The buses were lined up in front of what we now know as Viru hotel, right next to the New Market. The traffic organizer who also sold bus tickets worked in a small office at the corner of Pärnu road and Vene market.

1940-1959: buses still depart from the same place, only now it is known as the Stalin square. In 1949, after demolishing the market hall and moving the market to Tartu road district, intercity bus lines’s departure was moved to a square next to Estonia theater. A year later, suitable place was found for intercity bus lines at the side of the huge Stalin square at the beginning of Tartu road almost where Radisson hotel is today.

1959-1961: in the beginning of 1959, bus station was moved to its current location at the corner of Lastekodu and Odra street. The wooden 1-storied building on Stalin square was taken apart and re-built at the new bus station square right where there is bus line No 17 stop today.

1961-1965: new 2-storied bus station hall was built. According to the plan the new bus station complex was supposed to be ready by Estonian SSR 25th anniversary on July 21, 1965. The plan was more or less fulfilled, although there were several shortages pointed out in the exploitation deed. 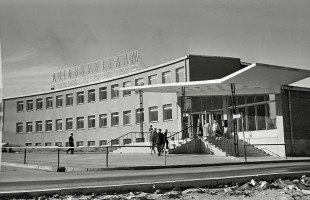 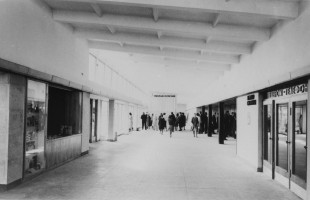